UniProt and the Expanding Tree of Life

UniProt loves life in all its forms, but we especially love its complement of proteins.  We want to bring you the protein sequences from the massive diversity of organisms across the whole planet.  We have been closely following how the Tree of Life is expanding and being increasingly accurately resolved.  Here's a look at a couple of the most exciting discoveries and how they are reshaping what we do.  Below is a revised Tree of Life presented by Laura Hug et al., which is based upon an alignment of 16 ribosomal proteins. 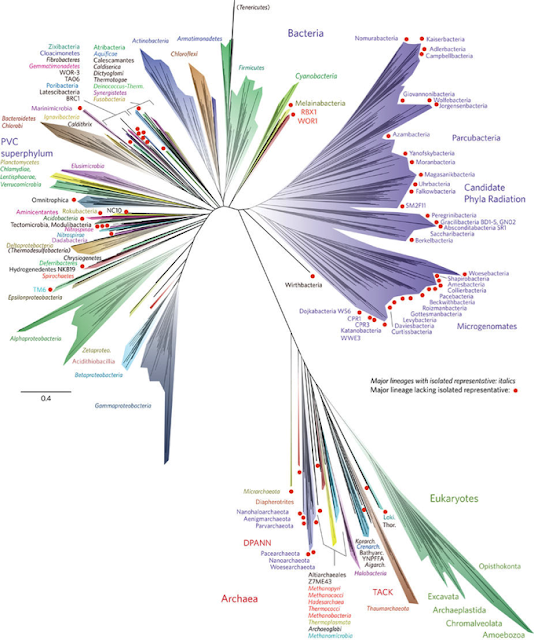 Figure 1. The revised Tree of Life from Hug et al. 2016. Lineages lacking an isolated representative are highlighted with non-italicized names and red dots.

We can see that the large majority of organisms are microbial, and as yet we are unable to grow a large fraction of them in the lab. Red dots in the figure show phyla for which not even a single organism has been cultured.  However, due to the power of next generation sequencing and improving metagenomic assembly and binning tools, we now have access to thousands of complete or near complete genomes assembled from metagenomic data (Anantharaman et al. 2016, Parks et al. 2017).  These genomes have been called MAGs for metagenomic assembled genomes.

Probably the most exciting MAG to have been assembled is that of an enigmatic archaebacterium that lives in deep sea sediments. Lokiarchaebacterium is named after the location at which it was first identified (Spang et al. 2015); the Loki’s Castle field of active hydrothermal vents or black smokers found in the mid-Atlantic. This microbe possesses many protein families that were considered to be characteristic of eukaryotes.  It was suggested that an ancestor of Lokiarchaebacterium was the origin of all eukaryotic cells.  The identification of more remotely related archaebacteria led to the definition of the Asgard phylum of archaebacteria (Zaremba-Niedzwiedzka et al. 2017).  Phylogenetic analysis showed that eukaryotes could be considered an ingroup of these archaebacteria.  This finding and the growth of MAGs of these organisms gives us an unprecedented opportunity to study the earliest events in the emergence of the eukaryotic lineage.

A huge yet mysterious branch on the tree of life has become known as the Candidate Phyla Radiation (CPR).  This branch of bacteria contains vast numbers of uncultured organisms.  Analysis of the MAGs of these organisms suggests that they do not have all the machinery necessary for free living and are likely to exist in symbiotic associations.  These cells are extremely small, yet offer a glimpse into hitherto unknown protein functions and diversity.

The authors of the influential papers mentioned here have submitted data to the DNA sequence databanks which flows into UniProt.  The set of protein sequences (proteomes) for these complete genomes  can be searched for in the UniProt Proteome database.  Some of these organisms have been computationally selected as part of the UniProt Reference Proteome collection (Chen et al. 2011) which aims to provide a selection of key proteomes and their proteins that cover the diversity of life. Reference proteomes and are indicated with the following icon:

You can investigate the protein sequences in these organisms in UniProt by following the links below to relevant proteomes:
·      Lokiarchaebacteria
·      Woesebacteria – An example group from the Candidate Phylogeny Radiation.