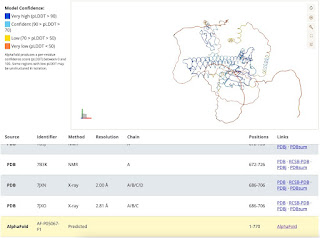 Posted by UniProt at 4:53 PM No comments:

Our bodies are living economies.

But unusual economies, because their component cells are interdependent - they all have the same business plan and work towards shared goals. Their employees are also unusual, because they are mainly proteins, and are the focus of our work at UniProt.

The shared goal of each cell in an organism is to maintain the function of the body. To reach this goal, each individual cell has a specific purpose which depends upon where each cell belongs and what it should do. For example:

●     Or does it need to make insulin, so that it can send signals to other cells to use sugar for energy?

●     Or does it need to send electrical messages to muscle cells, telling them to move...

The genome; the business plan for the cell

The business plan (the genome), consists of thousands of genes encoded by DNA molecules kept in the company head office - the cell nucleus. Genes describe the main building blocks of the cell, proteins, and how they should be made.

Proteins are responsible for creating the components of cells and bodies - including fats, sugars and even other proteins. These products may be used locally, inside the cell, or exported.

However, there is a big logistical challenge for every cell. Our genetic material, DNA, stays inside the nucleus so how does it communicate its 'memos' or instructions with the rest of the cell, telling it which proteins to make?

The answer, as in so many things, lies in sending the right message, at the right time.

Transcription factors; the business managers of the cell

Messages from the nucleus to the rest of the cell are made by proteins, known as transcription factors, that copy (transcribe) the information in genes into dedicated messenger RNA molecules.  RNA is related to DNA, but shorter-lived, and can leave the nucleus and carry memos to the protein synthesis machinery. Transcription factors work as a team, and include generalists, needed to transcribe any gene, and specialists, which ensure that the correct genes are transcribed  in a  particular cell at a specific moment in time. Generalist transcription factors are active in almost all cells and work with the basic cellular machinery to make messenger RNAs. Specialist transcription factors are required to help make decisions such as: which genes need to be switched on in a muscle cell when the muscle is active? Or in a cell that is responding to a viral invasion ? Or when an egg has just been fertilized by a sperm in order to produce a new human? Or, any other process which requires a gene to be switched on, or off.

Diseases are often the result of errors in the genome (business plan) that generate faulty products (proteins). As transcription factors are like molecular switches, turning genes on or off, they could potentially be used to turn off a damaged gene in a genetic disease.

It’s early days, but a transcription factor could be a promising new target for treating the crippling genetic illness, sickle cell disease (SCD). Starting in childhood, people with sickle cell disease suffer with chronic pain, recurrent infections, shortness of breath and sometimes strokes. The condition is caused by mutations in one of the proteins that carry oxygen around the body inside red blood cells, known as beta-globin, which cause it to become abnormally sticky. The name of the disease comes from its effect on the red blood cells, which become sickle-shaped (like a crescent moon) and block small vessels, like the capillaries, stopping oxygen getting to the tissues and sometimes causing vessels to burst. Most treatments only reduce the symptoms, but don’t prevent the disease. The only true therapy involves a stem cell transplant, and if successful, people spend the rest of their lives dealing with the side-effects of immune-suppressing drugs.

However, back in 1948, it was discovered that a few people with sickle disease had much milder symptoms if their cells produced a protein related to beta-globin, called gamma-globin (also known as hemoglobin subunit gamma-1). Gamma-globin reduces symptoms in sickle cell disease by reducing the stickiness of the abnormal beta-globin. In 2008, researchers made the exciting, and rather surprising, discovery that the gamma-globin gene can be switched on by turning off the transcription factor BCL11A.
So, if we could switch off BCL11A in the cells which develop into red blood cells, we could potentially develop a new treatment for this devastating illness. And there is now evidence that this approach may work...

In January 2021, a small clinical trial of a drug that switches off BCL11A demonstrated safety, and both an increase in gamma-globin in red blood cells and an apparent reduction in complications of sickle cell disease. Longer-term and larger clinical trials are in progress.

Posted by UniProt at 9:19 AM No comments: