Cogs of data in UniProt

UniProt's mission is to provide the scientific community with a comprehensive, high-quality and freely accessible resource of protein sequence and functional information.

Have you ever wondered how long it takes for a new protein sequence to reach you? Or how long it would take for any feedback you send about an entry to become incorporated (at the earliest)? Let’s follow the journey of an imaginary Protein X!

1) Protein X begins its UniProt life cycle when the sequence is imported into the database. As shown in the image below, our protein begins its UniProt life in the blue phase of 'Live Data', named thus because the UniProt production team is actively working on this data. Information can only be merged into protein entries in this blue phase. This phase runs for 4 weeks. For a newly imported sequence like Protein X, this phase consists of: 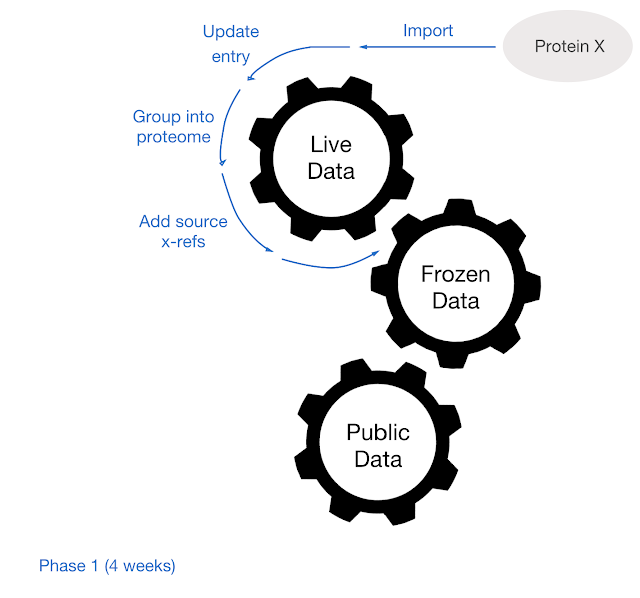 2) Protein X now enters the yellow phase of 'Frozen data' for 4 weeks. The UniProt production team freezes the new data and makes it available to some internal/collaborating groups to access it and work on it as follows:


While these internal/collaborating groups work on the entry in this phase, this information can't be merged into the entry yet (and the entry remains frozen). The new information received in this phase goes for post-processing in the next blue phase, as shown by the grey parts of the image below.

At the end of this 4-week yellow phase, Protein X is released to the public! Typically, as no curated information has been merged in yet, the entry is released as an unreviewed (Trembl) entry.

This is the first version of the protein entry that you see, 8 weeks after the sequence was imported into the UniProt databases. It only contains the basic information added in the first blue phase, before the freeze.

So you see it takes a new sequence at least 8 weeks to reach you (depending on when it was submitted), even though there is a UniProt release every 4 weeks. Let's call this first version of Protein X released here as Protein X.1. 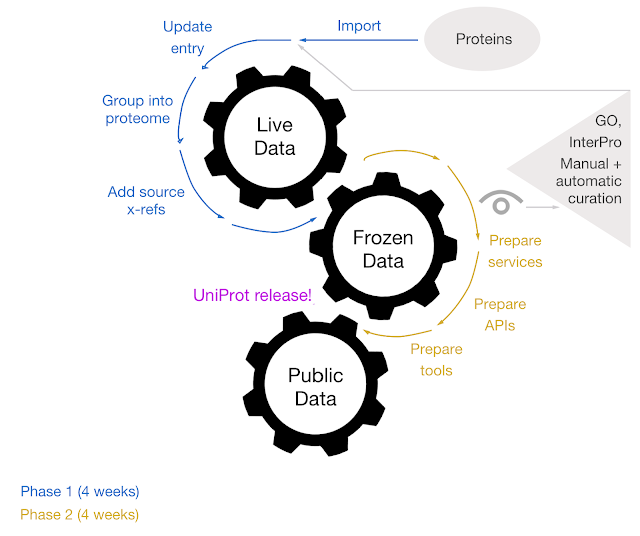 3) Protein X.1 now sits in the pink 'Public data' phase as part of the release for 4 weeks, which allows everyone to access it, including UniProt users and other external groups. They can send feedback, requests, additional papers, etc. about Protein X.1 to UniProt. This might trigger more expert curation by UniProt or other improvements to the entry for the future. The release is visible for 4 weeks and then archived when a new release is made.

The grey lines in the figure below show what happens in parallel to the first run of yellow and pink phases. While Protein X.1 is in the pink 'Public data' phase for 4 weeks, the next version of Protein X, let's call it Protein X.2, is flowing through its second blue over 4 weeks where information received during or after the previous yellow phase is being merged into it. If information from expert curation is merged into the entry here, the entry becomes a Reviewed (Swiss-Prot) entry.

Following this blue phase, Protein X.2 will be frozen and spend 4 weeks in the yellow phase and then be released to the public as the second version of the entry with more information added to it, i.e. ProteinX.2!

The cogs of the blue, yellow and pink phases are always turning. So, after the pink 'Public data' release phase, any improvements sent by users are fed into a future version of Protein X, say Protein X.Future, which will flow through a future cycle of the blue phase and then the yellow phase before becoming available in a public release again in the pink phase. 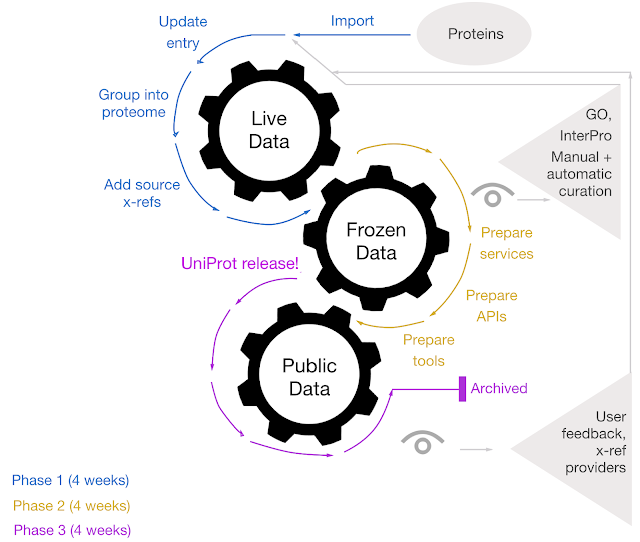 To summarise, if a new protein sequence is imported into UniProt in January, it would become available to you via a UniProt release in March. If you then sent us feedback about this entry, e.g. another paper about it, this information would become available in UniProt at the earliest in May (or later depending on the complexity of the suggestions).

There is a UniProt release every 4 weeks but behind the scenes, the blue, yellow and pink phases are always running in parallel. It's not only new protein sequences like Protein X that go through these phases but also existing UniProt entries so they can get new information added too. While you only see a release every 4 weeks, the cogs of data are always turning!